Rental income in the 2018 financial year grew by 8.7 percent to CHF 194.8 million. The growth was due, partly, to the extension of the portfolio in the previous year by means of acquiring four fully leased commercial properties in Adliswil ZH and Nyon VD and the reclassification of a fully leased own project at Schiffbauplatz in Zurich-West. For the first time, the five properties were recognised as income for a twelve-month period. The continued reduction of the vacancy rate made a substantial contribution to income growth as did real estate expenses reported below the long-term average.

The following distribution of the various types of utilisation were revealed in the period under review when measured by percent of rental income: Office and Services 60.9 percent, Residential 19.7 percent, Trade and Warehousing 7.6 percent, Parking 6.3 percent and Retail 5.1 percent while 0.4 percent applied to remaining utilisation.

On the cut-off date, the average duration of fixed-term rental agreements for commercial real estate was 6.4 years and the share of agreements to be renewed in 2019 represented a low three percent.

The cumulated vacancy rate was reported at a remarkably low 2.0 percent. This is due to the high quality of the portfolio and the further reduction of the cumulated vacancy rate by 60 base points compared to the previous year. The high 60-percent share of yield-producing properties managed by Allreal itself – and extraordinarily successfully – contributed to the gratifying development. The facility management of Allreal’s own properties is based on proximity to customers, high service quality and short reaction times and continues to be provided by the employees in the Zurich location taken over by Allreal following the divestment of Hammer Retex AG and integrated into the Real Estate division. The divestment of Hammer Retex AG in the first half-year 2018 generated a profit of CHF 2.1 million.

In the period under review, new rental agreements and extensions – some of them early – were signed concerning a total of 48,700 square metres. Significant agreements in terms of surface area and profitability signed or extended in 2018 relate to the commercial properties on Bändliweg and Vulkanstrasse, both in Zurich Altstetten, Binzmühlestrasse (Center 11) in Zürich Oerlikon and Lindbergh-Allee, a commercial property in Opfikon ZH.

Loss of income resulting from the largest unrented areas amounted to a total of CHF 1.9 million (2017: CHF 2.7 million), corresponding to a share of the total vacancy rate of 48.5 percent. These vacancies concern street-level retail space in Richti Wallisellen ZH and the commercial properties In der Luberzen in Urdorf ZH, Baarermatte in Baar ZG, Thurgauerstrasse in Glattbrugg ZH and Brandschenkestrasse in Zürich Enge.

Real estate expenses in the year under review were reported at a low CHF 22.6 million, corresponding to an expenditure rate of 11.6 percent in terms of the entire rental income (2017: CHF 24.6 million / 13.7%). As several large renovation and restoration plans will be implemented in the coming years, the expenditure rate will normalise and approach the long-term average of approximately 15 percent.

With effect from 1 October 2018, the residential property Fangletenstrasse 4–18 in Bülach was transferred from investment real estate under construction to the portfolio of yield producing properties and recognised as income. The project from own development and realisation in Bülach-Nord comprises four four-storey apartment buildings with a total of 76 rental units in the lower to medium price range. The investment volume of the own project with an annual target income of CHF 2.0 million, of which approximately 66 percent was let on the cut-off date, amounted to CHF 39 million.

The portfolio of yield-producing properties recorded a further acquisition in construction right implemented at year-end concerning a fully let commercial building located on Freiburgstrasse in Bern and fully recognised as income from 2019. The conveniently located seven-storey building completed in 1999 comprises approximately 19,000 square metres of lettable space. Annual rental income minus construction-right interest of the building leased to the Swiss Agency for Development and Cooperation (SDC) amounts to CHF 8.3 million.

In the year under review, the portfolio of investment real estate under construction recorded two additions and one divestment.

The additions resulting from reclassification implemented with effect from 30 June 2018 refer to two own projects, namely Hardstrasse 301 (Escher-Wyss site) in Zurich-West and Grünhof in Zurich Aussersihl representing an investment volume of CHF 120 million in total.

At Hardstrasse 301, on a site forming part of the Escher-Wyss site acquired in 2002, Allreal is currently implementing a replacement for an office building established in 1962 that no longer satisfied the technical, energy-related and economic requirements. As the structural condition was unsuitable for renovation making economic sense, Allreal implemented a study contract for a new building. The six-storey office building at an investment volume of CHF 40 million offers useful area of 5,800 square metres. Target annual rental income of the fully rented building amounts to CHF 2.3 million. Tenant occupation and reclassification to yield-producing properties is scheduled for early 2021.

The second addition concerns a new building comprising 80 residential units currently being erected in the courtyard of the Grünhof site in Zurich Aussersihl which was formerly used for trade and industrial purposes plus a replacement building with 8 rental units forming part of the perimeter construction. Useful area of the two new buildings from own development and realisation amounts to 8,022 square metres in total, representing an investment volume of approximately CHF 80 million. Reclassification to the portfolio of yield-producing properties will be carried out following completion scheduled for early 2021.

The divestment concerns a residential property, Fangletenstrasse 4-18 in Bülach ZH with 76 residential units, which was transferred to the portfolio of yield-producing properties.

As at 31 December 2018, the investment real estate portfolio comprised a total of 65 yield-producing properties, of which 21 residential and 44 commercial, as well as two investment properties under construction.

Valuation of the 67 investment properties carried out by an external valuer as at 31 December 2018 resulted in a positive value adjustment before tax of CHF 60.6 million (2017: CHF 21.8 million).

The clearly higher valuation is due, on the one hand, to the high occupancy rate and the low number of rental agreements up for renewal in 2019 and, on the other, to the reduction of discount and capitalisation rates carried out by the external valuer in view of the yield compression. Of the total value adjustment, the 21 residential properties represent CHF 46.9 million (2017: CHF 11.8 million), the 44 commercial properties CHF -0.5 million (2017: CHF 4.6 million), and the two investment real estate under construction CHF 14.2 million (2017: CHF 5.4 million).

The quantitative and qualitative development of the portfolio resulted in a market value of the entire portfolio on the cut-off date of CHF 4.16 billion (31.12.2017: CHF 3.96 billion), representing an increase of CHF 203.3 million. The share of yield-producing properties amounted to CHF 4,101.8 million and that of investment real estate under construction to CHF 58.1 million. 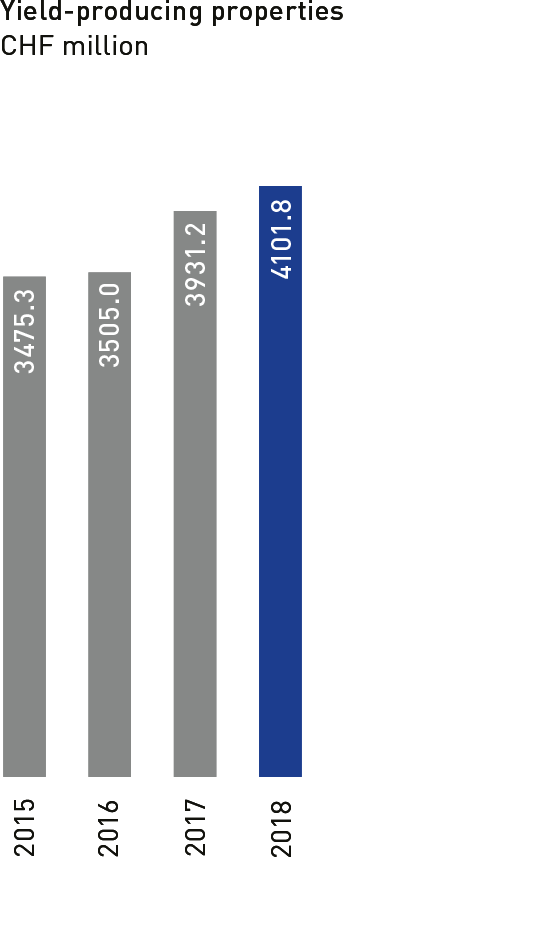 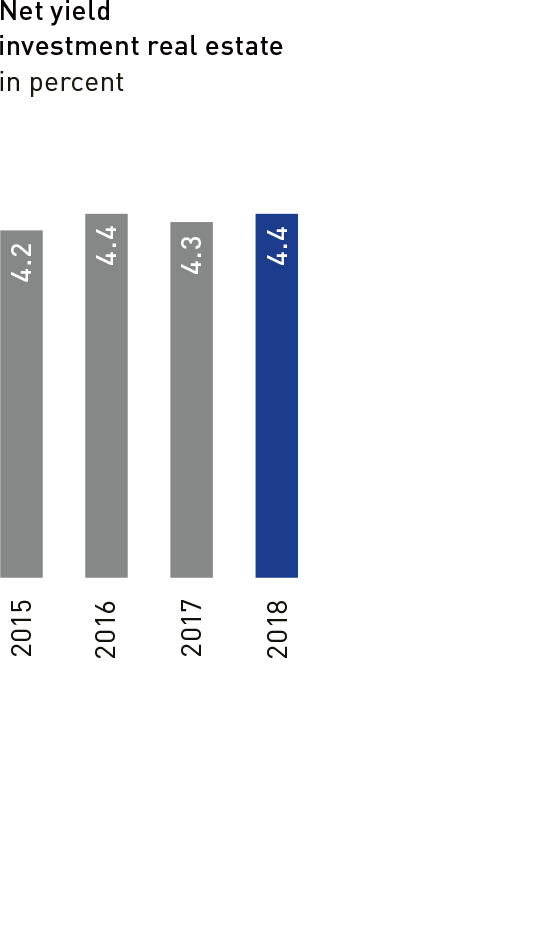 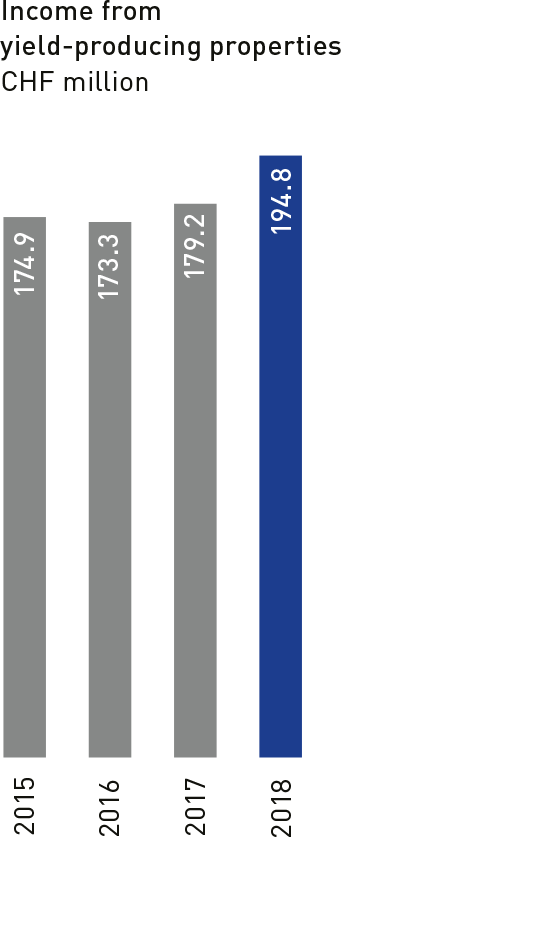 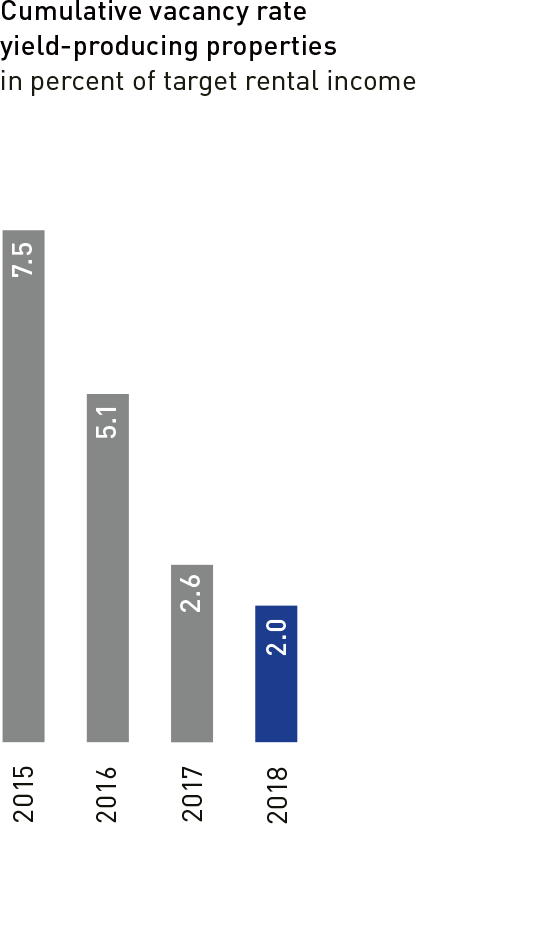