In 2018, earnings from Realisation Projects and Development amounted to CHF 37.8 million. This value, which is below that reported the previous year, reflects mainly the lower project volume resulting from the limitation to potentially profitable third-party projects. Gross margin achieved with the development and implementation of third-party projects amounts to a high 13.0 percent.

Sales of residential ownership in the projects Kirschblütenweg in Basel, Solistrasse in Bülach and Guggach in Zurich Unterstrass as well as the sale of the 12,004-square-metre development property on Grindelstrasse in Bassersdorf to a commercial buyer resulted in earnings from Development Projects and Development of CHF 5.5 million. Owing to the low number of available properties, as expected, profits from the sale of development real estate were reported below the comparable value the previous year.

Capitalised own work resulting from completion of projects from own development and realisation for the own portfolio or for sale to third parties in the period under review amounted to CHF 6.6 million (2017: CHF 7.5 million).

Operating expenses for the year under review of CHF 48.1 million are again reported below the previous year’s value (2017: CHF 51.2 million) and represent a decline of 6.1 percent due, especially, to lower personnel expenditures.

Operating profit (EBIT) of CHF 12.1 million (2017: CHF 20.8 million) is characterised both by sales-related earnings from the realisation of third-party projects below the previous year’s value and by lower profits from the sale of development real estate. Lower operating expenses only partly compensated for the decline in realisation and sales.

Three own projects were transferred to Realisation in the period under review. Consequently, the Development department again made a substantial contribution to both capacity utilisation of Realisation and the success of the company as a whole.

The projects referred to above concern an office building with usable floor space of 5,800 square metres located at Hardstrasse 301 in Zurich-West and a residential complex comprising 88 rental units as well as commercial and trade space in two newly constructed buildings on the Grünhof site in Zurich Aussersihl. Upon completion, both buildings will be transferred to the portfolio of yield-producing properties. Another construction project to be started in 2019 refers to a residential complex comprising 20 terraced condominium units located in Zufikon near Bremgarten AG.

Planning permission for the construction of the Dietlimoos-Moos complex in Adliswil was submitted in the second half of 2018. The complex represents a potential construction volume of CHF 180 million. It has been developed for a private investor and comprises six parcels of land. The new buildings were designed by various firms of architects. The complex includes 255 rental units and more than 9,000 square metres of commercial space. Construction start will be defined once planning approval has been obtained.

The development of an own project in Winterthur Seen and the connected approval procedure have been advanced in the period under review to the stage where transfer to Realisation will occur in the first half of 2019. The project implemented on land measuring 11,582 square metres comprises 8 apartment buildings with a total of 52 condominium units at an investment of approximately CHF 55 million. Construction start depends on the progress of approval procedure, possibly in the second half of 2019.

In the period under review, the Development department intensified its search for suitable land and acquired two tracts of land, one in Lucerne Eggen and the other in Zurich Albisrieden. Both properties are ideally suited for the development and realisation of condominium apartments in the medium price segment, which enjoys high demand.

The realisation of a residential complex comprising more than 70 condominium units is planned for the 8,386 square-metre property acquired from a private seller in Lucerne Eggen. The investment volume is estimated at CHF 33.5 million. In view of the design plan required by law, a project competition with six participating firms of architects was initiated in the second half of 2018. Adjudication will be carried out in the course of the first half of 2019.

The second acquisition concerns land with a building on it at an excellent and well developed location in Zurich Albisrieden measuring 2,195 square metres. The location in a zone with a high utilization rate allows for the implementation of about 40 condominium apartments. Ownership of the property acquired for CHF 22.5 million was transferred with effect from end November 2018. A project competition for the development at an estimated project volume of CHF 47.0 million will be implemented in 2019.

Further project developments initiated or processed significantly in the 2018 financial year in addition to participation in several full-service project competitions include:

The project volume including third-party contracts and own projects completed by the Realisation department in the 2018 financial year amounted to CHF 351.9 million, or 16.2 percent below the previous year’s project volume. The lower value is due to Allreal’s limitation to implementing third-party projects with calculable risks, realistic contractual terms and intact earnings prospects. Usually, these construction projects are more demanding as clients take into consideration aspects concerning both price and quality when awarding a contract. Thanks to the focus on a high quality of implementation, the gross margin reported for planning and realisation of third-party projects in the year under review amounted to a high 13.0 percent.

Based on the level of own and development projects initiated in the year under review, Allreal expects their share in completed project volume to rise. The aim in the medium term is to achieve a balanced relationship between own and third-party projects at an annual project volume of about CH  500 million.

The order backlog secured on the cut-off date of CHF 657 million corresponds to a capacity utilization of about 18 months.

Projects completed in the 2018 financial year

Allreal implemented a residential complex for its own portfolio on land adjoining the Bülachguss site in Bülach ZH in the style of a garden development comprising 76 rental units in four four-storey buildings with a centrally located underground parking garage. Construction of the own project completed on schedule at an investment volume of CHF 38.5 million started in autumn 2016 and renting one year later. Of the apartments in the lower to medium price segment, 50 were let by the cut-off date.

Allreal implemented a residential complex for an institutional investor in Wallisellen ZH at a construction volume of CHF 84 million. The project comprises four seven-storey apartment buildings surrounding a courtyard. Following a construction period of two-and-a-half years, the entire project including 218 rental apartments, commercial space and the underground parking garage was transferred on schedule mid-2018.

Further projects completed in the period under review included:

Allreal is implementing a mixed-usage residential quarter on the former industrially utilized Bülachguss site in Bülach-Nord for two real-estate investment funds and for its own portfolio. The project comprises 416 apartments, office and trade space and a public park. The construction sum for the rental and trade buildings amounts to CHF 175 million and the investment volume for the own project with condominiums CHF 55 million. The shell construction of the project was completed on schedule in September 2018. Completion of the project is staggered and scheduled for end 2019.

For a private owner at an attractive location in Rapperwil-Jona SG, Allreal is realising four four-storey apartment blocks comprising a total of 62 rental units and a central underground parking garage. Transfer of the project which begun in spring 2017 at a construction cost of approximately CHF 22 million is scheduled for the first half of 2019.

In Effretikon ZH, Allreal is implementing 4 six to seven-storey apartment buildings for an institutional investor comprising a total of 81 rental apartments and a central underground parking garage. The construction sum for the project which started in February 2016 amounts to approximately CHF 30 million. Transfer to the owner is scheduled for the first half of 2019.

At Ankerstrasse in Zurich Aussersihl, Allreal is realising a six-storey hostel for Stiftung Heilsarmee Schweiz (Swiss Salvation Army Foundation) at a construction sum of CHF 11 million. The project comprises nursing rooms, apartments, offices, kitchen infrastructure as well as common room, meeting room and seminar room. Construction of the project, which is situated at a sensitive urban location and includes a number of different functions, started early in 2018. Completion is scheduled for end 2019.

Further projects started in the period under review include:

While at the start of the year, 45 residential units were for sale, 33 units in the Solistrasse project in Bülach ZH and one condominium in the Guggach project in Zurich Unterstrass were sold in the course of the year for a total of CHF 55.2 million (2017: CHF 86.4 million). Earnings reported from the sale of residential ownership in the 2018 financial year amounted to CHF 5.5 million (2017: CHF 11.8 million).

In 2018, the Guggach and the Kirschgarten projects were successfully concluded.

The number of unsold units as at 31 December 2018 declined to 12 uncompleted condominiums, all of them in the Solistrasse project in Bülach ZH (31.12.2017: 45). In the 2019 financial year, planned beginning of the sale of condominiums in the two projects, Alter Züriweg Zufikon and Florenstrasse Winterthur, will add to the inventory of apartments for sale.

Net profit reported by the Projects & Development division for the period under review of CHF 9.0 million corresponds to a share in the Group’s net profit excluding revaluation gains of 7.6%. 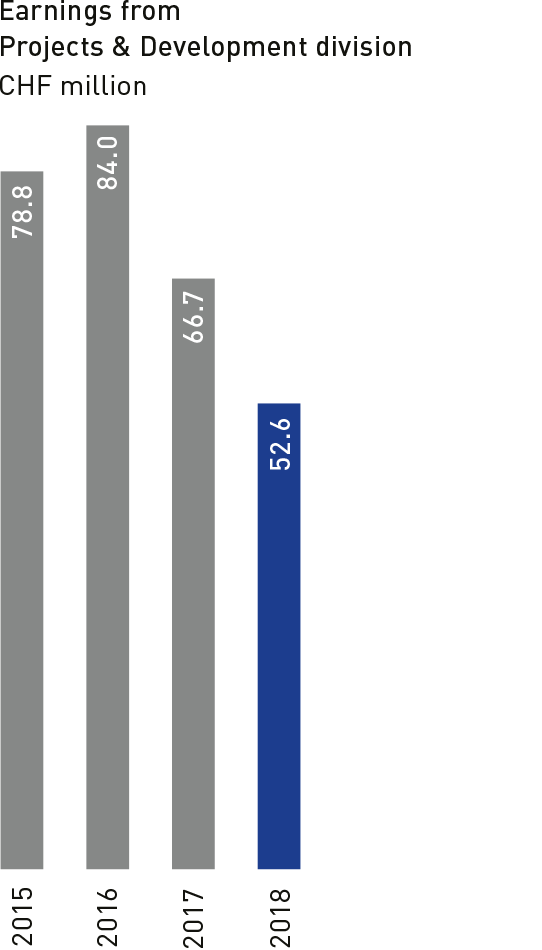