Rental income in the period under review grew by 3.4% to CHF 179.2 million. The increase in earnings is due, on the one hand, to successful rental activity and the connected decline in vacancy-related earnings losses and, on the other, to portfolio growth resulting from completion in 2017 of the commercial building on Schiffbauplatz in Zurich-West and the acquisition of four commercial properties.

As the additions represent commercial buildings exclusively, the share of residential properties in total rental income for the 2017 financial year decreased 18.7%. In contrast, the share of commercial real estate grew to CHF 145.6 million, or 81.3% (2016: CHF 32.7 million/CHF 1,140.6 million).

On the cut-off date, the average duration of fixed-term rental agreements for commercial real estate was 6.8 years and the share of contracts to be renewed in 2018 represented a low 3.0%.

In 2017, the cumulated vacancy rate, which had dropped considerably the previous year, decreased by yet another 2.5 percentage points to a very low 2.6% (2016: 5.1%). Several larger rental agreements that had been signed the previous year but became effective in the year under review made a significant contribution to the continued decline. This particularly concerns the commercial buildings Boulevard Lilienthal 2–8 in Opfikon ZH, Bellerivestrasse 30 in Zurich Riesbach and Herostrasse 12 in Zurich Altstetten. Close cooperation with the Projects & Development division proved to be an important factor concerning successful rental activity, both in terms of calculation and the tenants’ conversions and fit-out requirements.

In 2017, rental agreements concerning a total of 23,000 square metres were signed or extended. These include among others properties located at Hohlstrasse 600 in Zurich Altstetten, Zollstrasse 58/62 in Zurich City, Dreieckareal in Winterthur and White Plaza in Basel. A large share of the agreements mentioned affected net income in the period under review.

The largest unlet space representing a cumulated earnings loss on the cut-off date of about CHF 2.7 million and a share in the total vacancy rate of about 54.9% referred to the street-level space of Richti Wallisellen ZH and the commercial properties In der Luberzen 29 in Urdorf ZH, Dreieckareal in Winterthur, Baarermatte in Baar ZG and Route François-Perrot 10–14 in Le Grand Saconnex GE.

Real estate expenses in the year under review were reported at CHF 24.6 million, corresponding to an expenditure rate of 13.7% in terms of the entire rental income (2016: CHF 24.4 million / 14.1%). The fluctuations arising in a multi-year comparison reflect the big difference experienced in refurbishment projects concerning scale, complexity and time required.

Net yield of 4.3% is considered very good by market comparison and was positively influenced by the high letting rate and the slightly higher real estate expenses compared to the previous year.

In the year under review, the share of the Allreal properties managed by Hammer Retex in terms of market value grew from 48% to nearly 60%. The management of residential and commercial buildings by Hammer Retex guarantees high levels of customer focus and service quality, quick response and a regular exchange of information between landlord and tenant, which is of great importance for stable tenancies.

Portfolio expansion by means of own projects and acquisitions

Reclassification of the office building on Schiffbauplatz in Zurich-West from investment real estate under construction to the portfolio of yield-producing properties was carried out with effect from 1 October 2017. The five-storey building from own development and realisation comprises rentable space of about 13,000 square metres for office, trade and gastronomy use. The investment volume of the completely let building with a target rental income of CHF 4.7 million amounted to about CHF 75 million.

The portfolio of yield-producing properties with effect from 1 November 2017 recorded another substantial addition in acquiring three commercial properties in Adliswil ZH and one commercial property in Nyon VD with a total useful area of about 54,000 square metres. The seller, Generali Switzerland insurance company, will continue to use the buildings and has signed long-term rental agreements with Allreal. The rental agreements affected net income from the date of acquisition. The target annual rental income of the four fully let buildings amounts to CHF 12.5 million in total. Based on the rental agreements negotiated with Generali, the entire real estate expenses will be carried by the tenant for the entire duration.

The portfolio of yield-producing properties recorded a disposal owing to the reclassification to development reserves of a nearly fully let commercial building on Grindelstrasse 3/5 in Bassersdorf ZH in the period under review. Following consolidation of the property with a 6,000 square metre neighbouring property shown in the balance sheet as development reserve since 2008, the land area grew to 12,000 square metres. After reclassification, the property was assigned to Projects & Development and is suitable for either project development or sale.

Taking into account the changes mentioned above, on the cut-off date the portfolio of yield-producing properties included 20 residential and 43 commercial properties.

Following reclassification of the commercial building on Schiffbauplatz to yield-producing properties, the inventory of the portfolio of investment real estate under construction included the residential complex located at Fangletenstrasse in Bülach ZH at an investment volume of about CHF 39 million and market value on the cut-off date of CHF 25.4 million. Completion of the four apartment blocks in Bülach-Nord comprising a total of 76 rental apartments and target rental income of CHF 2.0 million is scheduled for the second half of 2018.

Valuation of the 64 investment properties carried out by an external valuer as at 31 December 2017 resulted in a positive value adjustment before tax of CHF 21.8 million (2016: CHF 85 million). 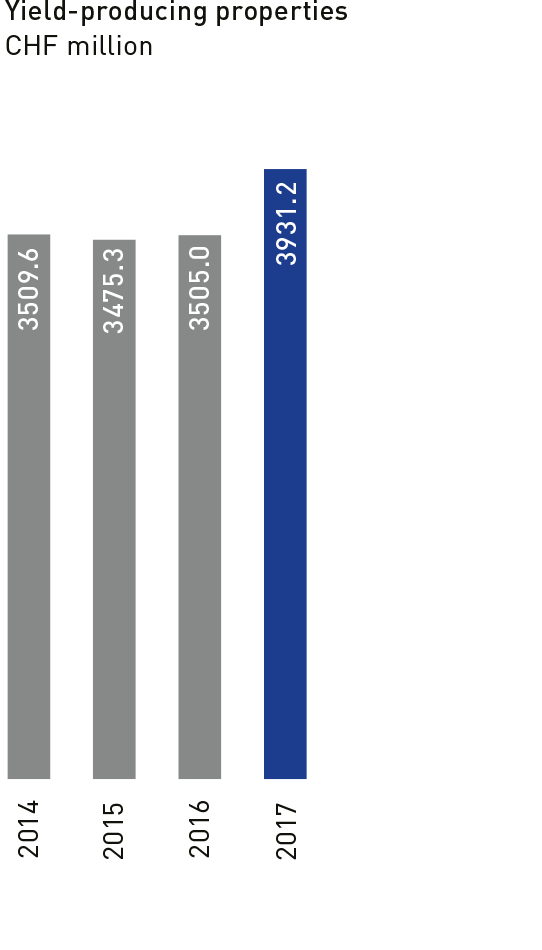 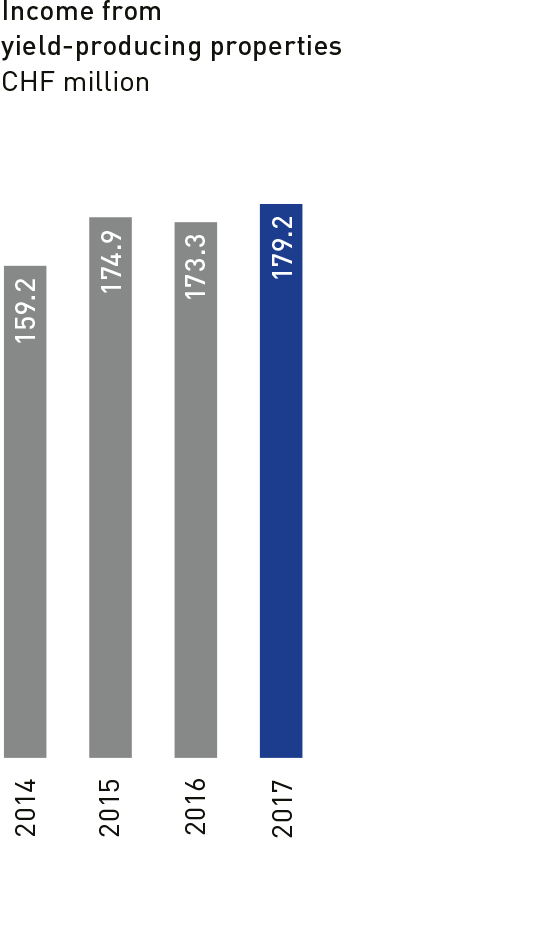 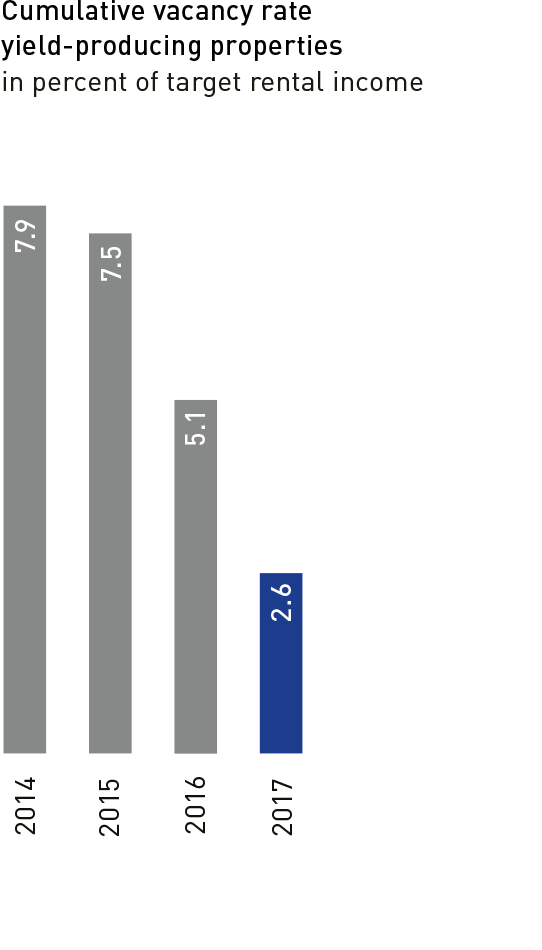